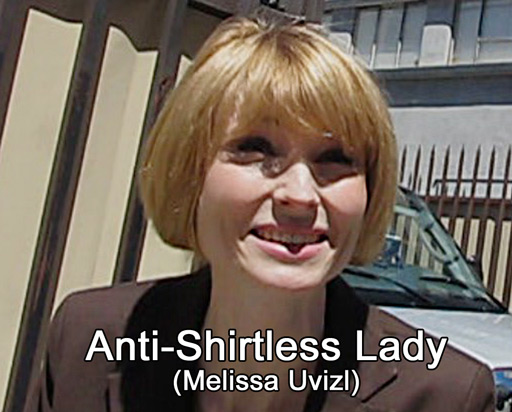 The church of Scientology got two ex parte (emergency) temporary restraining orders (TROs) on me preventing me from going to three small areas of Hollywood. My lawyer Graham Berry filed a "Special Motion to Strike" which basically states that it is the cult that is harassing ME, not the other way around. The idea is called SLAPP. Strategic Litigation to Prevent Participation.  Several of these documents are very large and read like mini-histories of Scientology from inside and out. Much of it is not even about Lissa Uvizl, Lewis Miranda or I.   Here's the scoop on what happened in court. The judge basically "cut the baby in half" leaving both sides somewhat unhappy. I guess that's called pragmatic leadership.  However, I got 80% of what I wanted and Scientology only got 20%. And that 20% is mostly abstract. That is, it won't affect my ability to protest in any practical way.

THE BAD
I don't have to stay 100 yards from Lissa Uvizl's work and home, but I must still stay fifty yards away. I can't protest near the Hollywood Guarantee Bldg. or on one side of the Celebrity Center for three years or until Mrs. Uvizl moves or until the cult goes bust, whichever comes first.  I have to be a little nicer to cultists and not follow them if they say "don't follow me."

THE GOOD
Even though I lost to Lissa Uvizl I DO NOT have to pay her court costs which lawyers tell me could have been as high as $25,000! "I consider court costs a wash" the judge said as he legally absolved me of paying but also prevented me from receiving money.

Lewis Miranda was totally defeated and the judge agreed with the anti-SLAPP motion. This means Judge Rico believes that I was being legally harassed by the church while trying to conduct my constitutionally protected speech/conduct. He believes the cult brought this lawsuit against me not to win but to exhaust me legally or psychologically or financially.  This opens up RICO Racketteering issues (not to be confused with the judge's name).

I can now go and protest on LRH Way at the Big Blue Building, which we promptly did! We shut down their campus today. Everyone was locked inside! Pics and videos forthcoming but don't expect a lot of drama. But frumpy guy and Patty Baber showed up! We think Frumpy Guy never changes his clothes and his name is "Jeff Farrow."

The judge allowed all of Graham's evidence, including lots and lots of damaging data about the cult, into the public record. It can now be quoted and analyzed by the press. In fact, Google has scanned the docs from my website and phrases from the documents show up now in searches!

The difference between the two cases is that, in the Uvizl case, she told me to go away and I didn't and I said caustic remarks, aka I "annoyed" her. My lawyer told the judge "but the purpose of a protest is to annoy SOMEBODY." Also Miranda footage was taken at a group protest, not a flashraid like Uvizl's footage was. Miranda did not tell me to go away and in fact shoved my camera and did not appear annoyed.

This is an important point if I appeal as it's constitutionally iffy that annoying Lissa Uvizl  is enough to warrant a TRO. So the judge threw the cult a bone. He appeared to be nervous to some observers. He didn't make a lot of eye contact with the lawyers while they were talking. Some speculate he just wanted Scientology out of his court. If Scientology won both cases I would have owed court costs and we would have had to appeal. If I won both cases Scientology would certainly appeal and be furious with the judge (lock your pets up). The judge mentioned his ruling will "save trees," aka prevent giant documents and endless appeals. By winning one and losing one the judge cut me some slack and negated my having to pay court costs but still gave Scientology a minor victory. But as Moxon said "there are over 300 other places he can protest in California."
Early docs from Kendrick Moxon's ex parte temp restraining order against me