﻿
HOLLYWOOD MEDIA CENTER
The cult buys a TV studio in Hollywood despite having a perfectly huge one in unincorporated Riverside County, CA 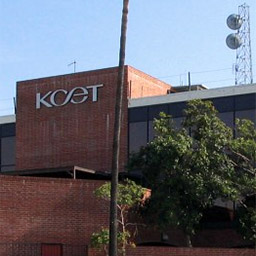 APRIL 2011, LOS ANGELES:  Financially strapped public broadcaster KCET has sold its studio to the Church of Scientology.  The station dumped PBS and donations are down in a terrible economy.  So they went for the fast kult kash and are now temporarily renting the buildings they have operated in since 1971.

The church told the LA Times that "... the acquisition would expand its audiovisual capabilities and enable it to move further into broadcast production. The studio includes two sound stages, extensive post-production facilities and modern TV, satellite and Internet broadcasting capabilities, the church said. 'It is a perfect fit, in both size and location, for the expansion of the Church of Scientology's production of religious and social betterment audiovisual properties, and we welcomed the unexpected opportunity to acquire it.'"

That makes it sound like they had not planned to buy anything and they may not do something with the property for some time.  They often buy properties and then do nothing. Ninety minutes away they have another giant production facility called Golden Era Productions aka Gold Base aka Int Base.  It has a giant "castle" shaped soundstage complex 72,000 square feet in size.  The largest single stage is 20,000 square feet. They also feature every sound and post production facility you could want.  There is no need for more production space.  But chances are Gold Base has become too "hot" with all the bad publicity of people being kept as slaves and prisoners there.

Strangely, TXL Films is a LA based production house owned by Scientologists which does many of their videos. So they have THREE video production houses for a church with few members?

The Sunset Blvd. lot, which has served as a studio since 1912, used to be the home of Monogram Pictures and Allied Artists. Scenes were shot there for dozens of notable films, including "El Cid" with Charlton Heston, John Ford's "The Hurricane" and the Charlie Chan mysteries.

APRIL 2012:  KCET announced they would move to The Pointe, in Burbank. Now they are next to NBC and Disney.
TOUR THE FACILITY AFTER IT'S GRAND OPENING

In typically overdone and slightly menacing fashion, the Church of Sci once again boasts of it's empty properties, this time the Hollywood Media Center.   One lavish interior full of professional equipment after another is trotted out, yet every room is empty. Some exist just as computer animation, or video so digitally processed it LOOKS like antiseptic 3D computer animation.

A Church is not a building, a Church is the parishioners.  But they won't show them in any of their architectural tours.  That's because if someone appears in the video and then leaves the Church noisily the whole thing will have to be reshot. And old copies of the video featuring the person who "blew" will be used to embarrass the cult.  So it is easier just to pretend Scientologists don't exist while filming these promos.  Pretending Scientologists don't exist is actually quite easy. The outside world has been doing it for about fifteen years!

It is very sad to see one of Hwd's original "poverty row" studio properties, the place scientist Dr. Carl Sagan shot the video interiors for the PBS series "Cosmos," fail into the hands of  an anti-Science cult.